Fighting Fantasy is a series of single-player role-playing gamebooks created by Steve Jackson and Ian Livingstone. The first volume in the series was published in paperback by Puffin in 1982.

The series distinguished itself by mixing Choose Your Own Adventure-style storytelling with a dice-based role-playing element included within the books themselves, the caption on many of the covers claiming each title was an adventure “in which YOU are the hero!”

Fighting Fantasy Legends is a role-playing game based on three books from the Fighting Fantasy series, namely The Warlock of Firetop Mountain,  City of Thieves and Citadel of Chaos.

Being based on books, it is not surprising that the story is pretty good. Each book has its own area, but the game has modified the story to force you to explore other areas in order to complete any one area. Although good, it is still not as good as the likes of Baldur’s Gate. 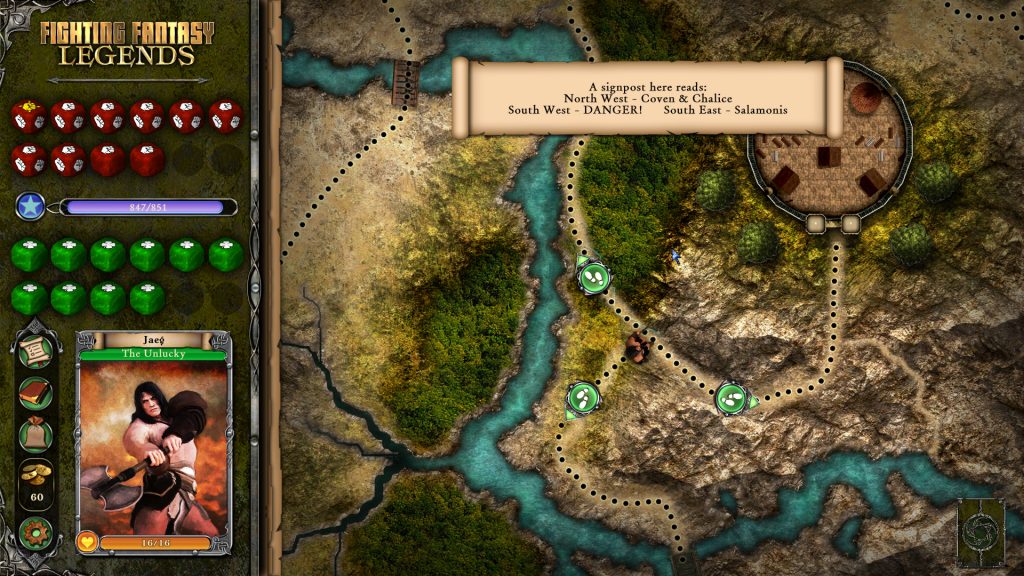 The music is good.  There are only a handful of tracks,  so they repeat a lot, but it never got annoying for me.

The game feels more like an RPG than the books by allowing you to gain experience and level up. There are no complex statistics or skills to manage. The only things you can upgrade are skill dice and luck dice. Even your stamina (health) does not increase with levels. Upgrading your dice means adding an extra symbol to one of your dice, up to the maximum of three per die. It may not look like much but it does make a noticeable difference when you throw those dice.  This simple dice upgrade system actually gives a good sense of progression. 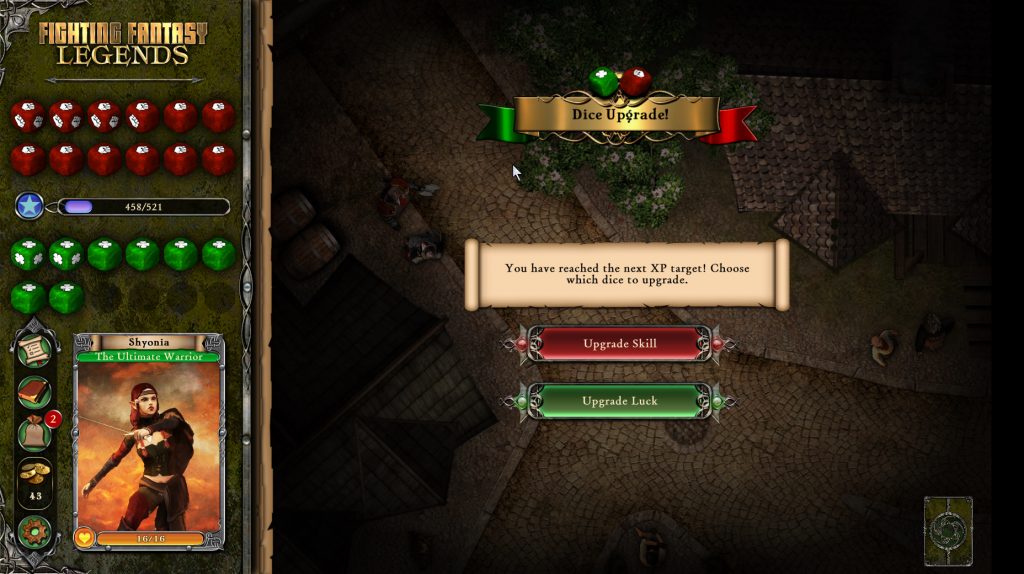 Progress is automatically saved and there is only one game that can be saved. Every time you start a new game, your previous progress is deleted.

I wish there were more shortcut keys. Except for the space bar to “OK” some of the text and roll dice, all other options must be clicked on with the mouse. It would quicker to have 1,2,3 placed next to the options for selection or something similar. 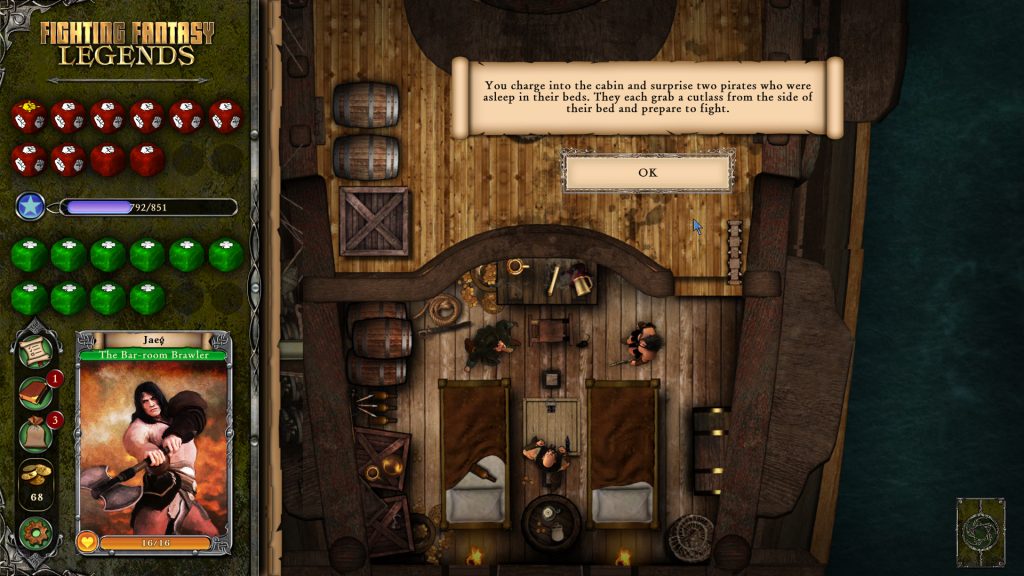 There is not much in the way of replay value.  Yes, the higher difficulty levels are more challenging and you can configure your character differently to try out different strategies. Unfortunately, the story remains the same and the random events feel the same as well. 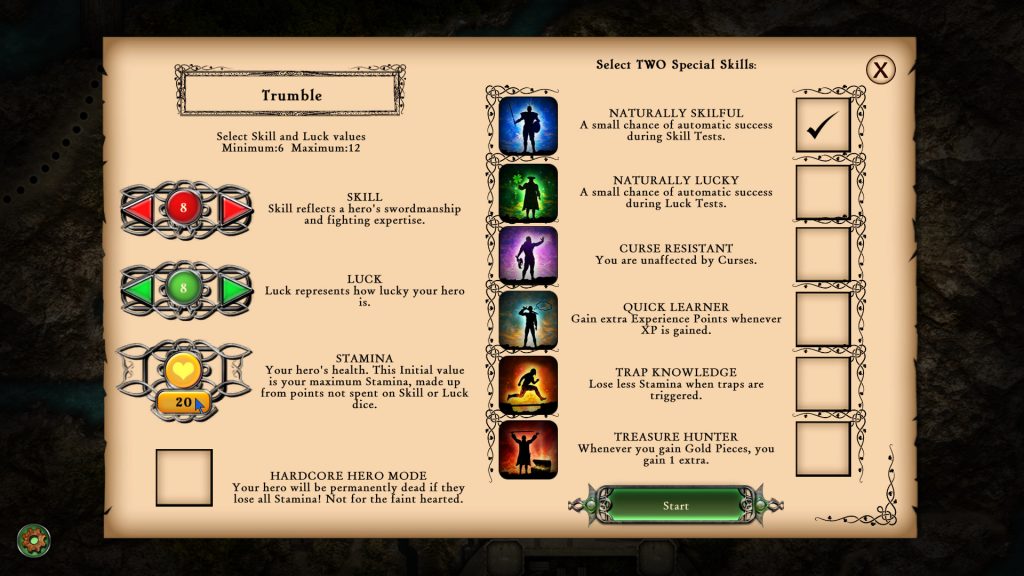 Combat involves rolling dice, but other than the first round, there is nothing to do except continually click OK to roll the dice until the fight has finished. There should be an auto fight option to speed things up.

The combat in the game is different from the books. The game has swapped the six-sided dice for a whole bunch of custom dice with symbols on them. At the start, every dice only has one symbol on one side and rolling the symbol means you get one point for that roll. 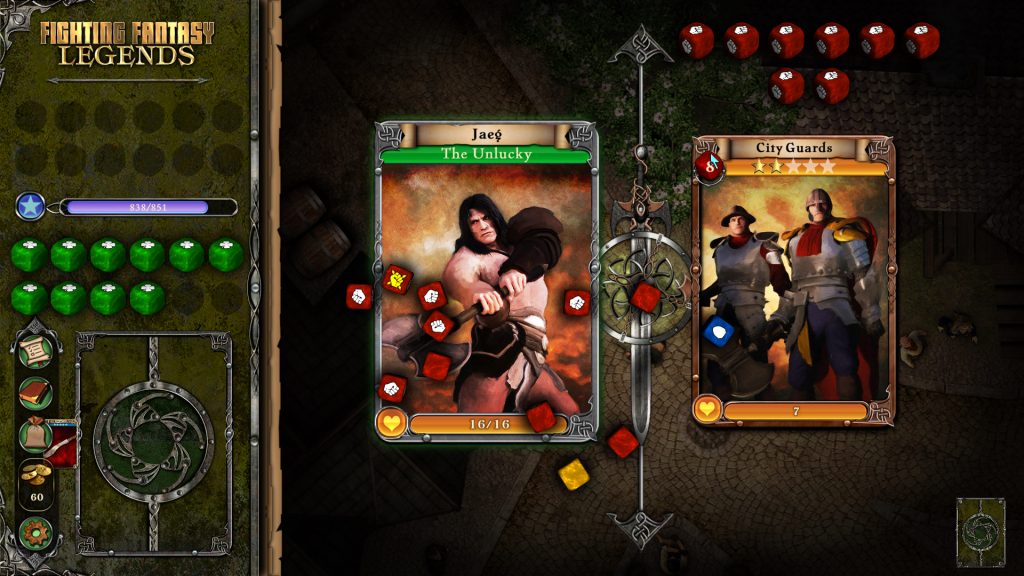 The whole top-down view and animations remind me of the old action game Gauntlet. I don’t know why. Fighting Fantasy Legends moves quite slow whereas Gauntlet is a fast action game.

For a game that is based on books, there is not as much reading as I expected.

Fighting Fantasy Legends is an RPG, but movement is restricted to choices provided by the narrative. This is one aspect where the game is just like the books. More often than not, you will move forward and cannot move back. Having said that, when you reach the “end” of an area, you will have to start that area again to explore previously missed opportunities. 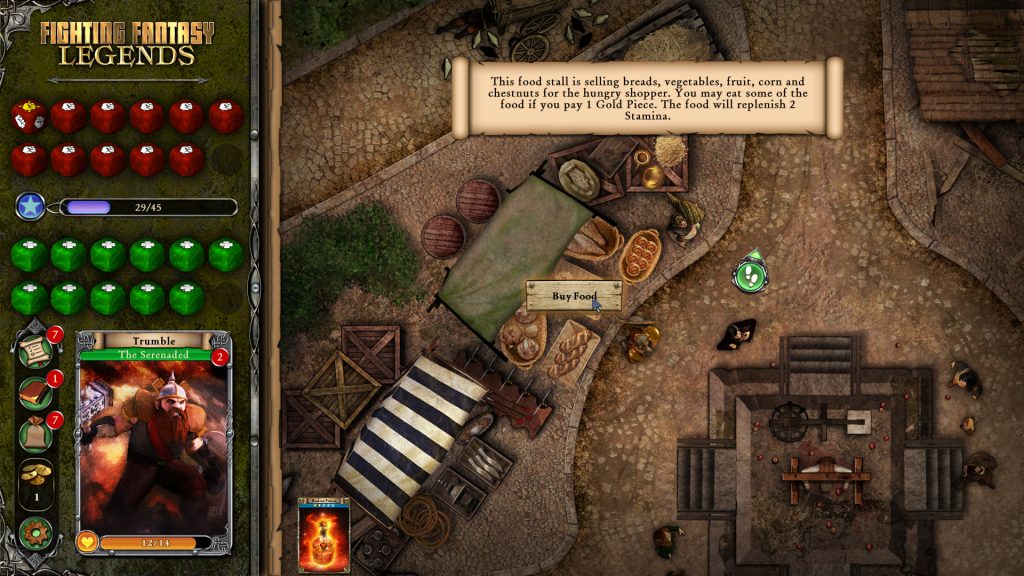 There are three characters to choose from, but it does not make much difference to the game. The most noticeable difference is just having a different character image. Other than that I have only seen one location where the event slightly changed based on your character.

I have only read one Fighting Fantasy book and that was in the 90s.  I cannot remember the story or even the title of the book.  I do remember not being able to level up in the book, but it was still good fun, even with the constant dying and restarting.

I have completed the game on the easiest difficulty of Adventurer, but I have not completed all the side quests.